The following analysis of the Western Washington real estate market is provided by Windermere Real Estate Chief Economist Matthew Gardner. I hope that this information may assist you with making better-informed real estate decisions. For further information about the housing market in your area, please don’t hesitate to contact me.

The Washington State economy has added almost 370,000 jobs since the lowest point of the recession at the start of 2010. Additionally, total employment is 176,000 jobs higher than seen at the 2008 peak. With a vast majority of our metropolitan areas having fully recovered from the job losses seen during the recession, I expect to see somewhat more modest job growth in the coming year. That being said, our economy will continue to expand, which will be a benefit to our region’s housing market. 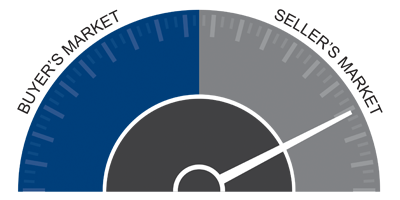 This speedometer reflects the state of the region’s housing market using housing inventory, price gains, sales velocities, interest rates, and larger economics factors. For the fourth quarter of 2015, I have left the needle at the same position as the previous quarter. In as much as the market is still very heavily in favor of sellers, I fear that some markets are reaching price points that will test affordability. Furthermore, while inventory levels are likely to see some growth in 2016, it will not be enough to satisfy demand, adding further upward pressure to prices.

Overall, 2015 was a stellar year with sales volumes and home prices moving higher across the board. In 2016, I believe we’ll see some growth in sales activity, as well as continued price growth­—just at more modest levels than last year. Interest rates are going to rise moderately through the year, but still remain very competitive when compared to historic averages. In other words, any increase in interest rates should not be a major obstacle for home buyers.

Looking forward, I believe 2016 will be a year of few surprises. Because it is an election year, I do not expect to see any significant governmental moves that would have a major impact on the U.S. economy or the housing market.

Matthew Gardner is the Chief Economist for Windermere Real Estate, specializing in residential market analysis, commercial/industrial market analysis, financial analysis, and land use and regional economics. He is the former Principal of Gardner Economics, and has over 25 years of professional experience both in the U.S. and U.K.